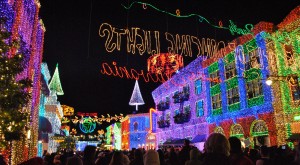 This Friday, the holiday season will officially start at Disney’s Hollywood Studios® when The Osborne Family Spectacle of Dancing Lights is lit for the first time this season! Included with standard admission to the park, the show has become a holiday tradition since 1995. The simply breathtaking seasonal display is made up of more than 5 million glittering LED Christmas lights that Disney Imagineers have perfectly synchronized to holiday music.

The Walt Disney World® Resort has announced that this year, Santa Goofy will join the fun inside his very own Winter Wonderland. This area will serve as a meet and greet area during The Osborne Family Spectacle of Dancing Lights. Also added this year is an eighth song for the lights to sync to, a special arrangement of “Winter Wonderland” by Creative Entertainment Music Director Dan Stamper.

If you’ve never seen The Osborne Family Spectacle of Dancing Lights, it is something that you must do! Pictures are not able to truly capture just how amazing it is. It will run Nov. 9 through Jan. 6.