Trek into the Savannah at Disney’s Animal Kingdom 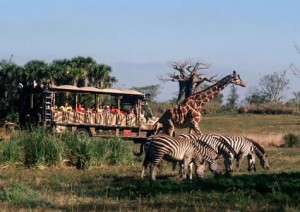 If you’ve ever wanted to venture off the beaten path and farther into the Kilimanjaro Safaris Expedition savannah, you’ll have a chance later this year. Disney’s Animal Kingdom® Theme Park will be offering a new, immersive experience that’ll take a small group of Guests on personalized, guided treks along some unexplored areas of the Harambe Reserve.

During the excursions, you’ll be able to spend more time observing the wildlife on the savannah and have a chance to learn about the animals and their behaviors from a Disney guide. Adventurers will also trek through an undeveloped forest area of the Harambe Reserve and then board a unique vehicle specially designed for the rest of the quest.

Reservations for this specially priced tour won’t begin until later this year, so keep checking back for more details.