8 Things We’re Excited About in 2018 at Disney Destinations

While it’s hard to believe that 2017 is almost over, we are overflowing with excitement and anticipation of what’s coming in 2018 for Disney Destinations!

Here’s 8 things (in no particular order) that we can’t wait to experience!

1 Toy Story Land- In Summer 2018 at Disney’s Hollywood Studios®, the all-new Toy Story Land will open to guests. Shrinking guests to the size of a toy, three attractions and a new quick-service dining location will await guests in the 11-acre play space. Slinky Dog Dash (a family-style coaster) and Alien Swirling Saucers will be the new attractions joining the already existing guest favorite Toy Story Mania!®. Woody’s Lunch Box will offer several meals and old-fashioned soda floats. No exact opening date in 2018 has been announced.

2 Disney Springs™ Additions- When you’re visiting the Walt Disney World® Resort, Disney Springs™ is your place to eat, drink, and shop! And in 2018, the list of options is growing! Eight new dining concepts will open in 2018! The Edison will open as a lavish “Industrial Gothic” restaurant, bar and nighttime destination. Adjacent to that is a trio of modern Italian restaurant and bar concepts – Maria & Enzo’s, Enzo’s Hideaway, and Pizza Ponte. Terralina Crafted Italian will feature dishes inspired by “Top Chef Master” Chef Tony Mantuano ‘s adventures in Italy. Master Sommelier George Miliotes’ Wine Bar George will offer more than 100 wine selections by the bottle and glass along with shareable plates, cheese and charcuterie. Jaleo, a Spanish concept by world-renowned Chef José Andrés’ and Wolfgang Puck Bar & Grill are also slated to open in 2018.

3 Disney’s Animal Kingdom® Theme Park Celebrates 20 Years- Opening its gates for the first time on Earth Day in 1998, Disney’s Animal Kingdom® Theme Park will celebrate 20 years in 2018! As part of the celebration, the Flights of Wonder show is being retired to make room for the debut of a new show featuring Russell and Dug from Disney•Pixar’s film UP! The new show will feature species of birds from around the world at the Caravan Theater in Anandapur Village. We’re sure that more special events will be announced before the big day, so stay tuned to our Facebook page for more details!

4 Disney’s Caribbean Beach Resort Transformation- Disney’s Caribbean Beach Resort is currently receiving some major enhancements that are set to be completed late Summer 2018! For our guests that have stayed at the resort before, the biggest change will be the elimination of the Customs House! Old Port Royale will act as a centralized location for check in/out as well as merchandise and dining. Other updates include an all-new Centertown Market for casual eats, waterfront dining at an all-new Shutters restaurant, a new Banana Cabana outdoor bar and lounge, and an refurbished Calypso Trading Post for shopping.

5 Return of Disney on Broadway– Much to our delight, the Epcot® International Festival of the Arts will return from Jan. 12 – Feb. 19, 2018! Also returning is what we believe to the highlight of the festival, the Disney On Broadway performances which happen each weekend (Fridays through Mondays at 5:30p, 6:45p and 8:00p) in the America Gardens Theatre. This years performers include:

The concerts are included with standard Epcot® admission but because of popularity, we suggest experiencing Disney on Broadway with a dining package that includes preferred seating!

6 Pixar Fest and Pixar Pier– For over 20 years, the beloved characters of Pixar Animation Studios have found a special place in our hearts. And in 2018, they’ll come to life like never before with the addition of Pixar Fest and Pixar Pier at the Disneyland® Resort! Pixar Fest, the biggest theme park celebration of stories and characters from Pixar, will feature a new “Together Forever—A Pixar Nighttime Spectacular” plus the return of ‘Paint the Night’ and ‘Pixar Play Parade.’ Pixar Pier will transform the area that is now Paradise Pier inside Disney California Adventure® Park with the thrilling, reimagined Incredicoaster, four new imaginative neighborhoods, plus entertainment, themed food and beverage, and more! CLICK HERE for more details on everything Pixar coming to Disneyland® Resort.

7 Downtown Disney® District Additions- There’s no doubt that the west end of the Disneyland® Resort’s Downtown Disney® District will see a lot of changes in the next 4 years with the construction of a new Disney-owned Four Diamond hotel that is set to open in 2021! But in 2018, you’ll see a few new locations open for your enjoyment. Splitsville Luxury Lanes will open in early 2018 with 20 bowling lanes, four dining areas, and much more. The New York-based Black Tap Craft Burgers & Beer will open its first California location offering award-winning burgers and signature CrazyShake™ milkshakes that boast whimsical and over-the-top decorations and flavors. And in early 2018, D-Street will be re-imagined into a Disney-themed home goods store with products that change with each season.

8 Enchanting Enhancements for Disney Magic- Exciting new spaces and new experiences are coming to the Disney Magic in March 2018! An all-new enchanting dining experience will be created for families at Rapunzel’s Royal Table! Guests will be treated to live entertainment during their dinner, and maybe even an appearance by Princess Rapunzel herself. A redesign is coming for the Vibe, the space on the ship reserved for teens ages 14-17, which will be transformed into a trendy urban loft environment. And Cove Café, an adult-exclusive retreat located near the Quiet Cove Pool, will be redesigned in a sophisticated tropical style. The new enhancements debut on the Disney Magic’s Mar. 9, 2018 sailing.

What new addition at Disney Destinations are you excited about? Contact your Magic Maker® today and start planning your next getaway!

In addition to the change in bedding, a refresh has been given to the other furnishings in the room giving them an overall new look. With the new dark furniture and a splash of color through artwork and other furnishings, the changes are very refreshing and make the rooms very inviting.

At this time no completion dates have been announced. We will be sure to keep you updated as information becomes available. In the meantime, enjoy this sneak peek of the new rooms: 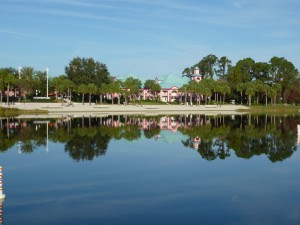 I’m enjoying the breeze as I swing on a hammock nestled between two palm trees.  My husband has gone off to fetch me a frozen tropical drink and my kids are exploring the beach.  I can’t get over the beautiful scenery that is laid out before my eyes. The reflection of the pink cottages of Aruba, in the waters of Barefoot Bay, is breathtaking.  I could stay here forever. Oh wait…..I am at Walt Disney World® Resort! In a little while I’ll be hanging in midair on Tower of Terror at Disney’s Hollywood Studios™ instead of this hammock!

Disney’s Caribbean Beach Resort is definitely a tropical retreat not to be overlooked if you are considering a stay at a moderately priced resort right in the middle of all the magic that is Walt Disney World® Resort. Just a short bus ride from each of the parks, Disney’s Caribbean Beach Resort is an island themed resort that is spread out around the 45 acre Barefoot Bay.  A stay in a room situated in Trinidad South will delight guests with a fun pirate theme for just a little bit more than a standard room.  Meanwhile, guests staying in rooms directly on either side of Old Port Royal Towne Center, in Trinidad North or Martinique , will find quick and easy access to the food court, restaurant, gift shop and pool. The close proximity to the Towne Center puts these rooms in a preferred category, but it is definitely worth the slight increase in price to be near the food court and pool where you are guaranteed to spend most of your time while at the resort. Guests staying in rooms situated on the other side of Barefoot Bay in Aruba, Jamaica, and Barbados will enjoy a scenic walk across the Barefoot Bay Bridge as they make their way to the Towne Center.

Disney’s Caribbean Beach Resort is bustling with activity at any time of day. In the mornings you may see walkers and joggers on the many scenic paths around the bay or families enjoying a leisurely surrey bike ride. In the afternoon you will definitely see swimmers enjoying pool time, complete with water cannons, water slides and dumping buckets, in the recently refurbished pirate themed pool near Old Port Royal Towne Center .  Out on the bay is where you will find boaters enjoying a leisurely sail on the calm waters.  And inside Old Port Royale Town Center you will find guest enjoying their food from the quick serve restaurants of Market Street or Shutters, the resort’s table service restaurant.  And don’t fret if you have forgotten something or want to pick up a special souvenir. Shoppers will find plenty of necessities and Walt Disney World® Resort themed merchandise at the Calypso Trading Post and Straw Market.  Evenings at this resort will bring you roasted marshmallows on the beach and movies under the stars.   Need I say more?

So, when you are ready to book your next Walt Disney World® Resort vacation don’t forget about this charming, tropical paradise called Disney’s Caribbean Beach Resort.   And don’t forget to call on one of Off to Neverland Travel’s® Magic Makers® to help you to make the most of your Walt Disney World® Resort vacation by utilizing their expert planning services.

Have you ever dreamed of sailing the seven seas or searching for buried treasure? Would you like to drift off at night in a pirate-ship bed, dreaming of far-away lands? A new option at Disney’s Caribbean Beach Resort may be your dream come true!

Beginning in January 2009, 384 rooms in the Trinidad South village will be transformed into Pirate Rooms. These special rooms feature two double beds, along with highly themed furniture, buccaneer accessories, and swashbuckling décor from stem to stern. They are sure to immerse your vacations in the spirit of “The Pirates of the Caribbean!”

Live out your pirate dreams, and stay in one of these unique rooms, a new room category at Disney’s Caribbean Beach Resort. There’s nothing else like it this side of the Seven Seas!